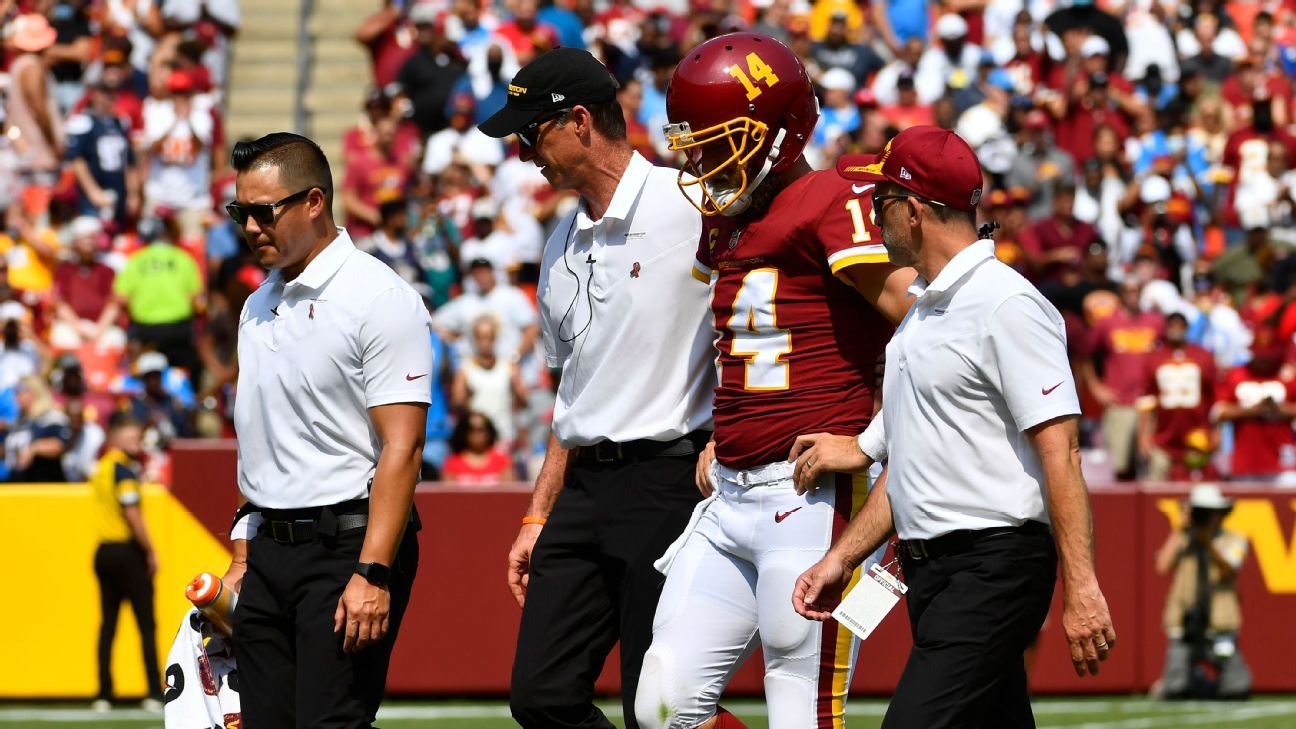 ASHBURN, Va. — The Washington Football Team placed quarterback Ryan Fitzpatrick on injured reserve, but it remains uncertain whether it will be a short or long stay.

An MRI revealed that Fitzpatrick had a right hip subluxation, but coach Ron Rivera said he’ll see more doctors to determine the severity of the injury and how long he’ll be sidelined. He’ll have to be on IR for at least three weeks.

“We want to make sure we get as good an answer to what’s going on so we know how to handle,” Rivera said.

Fitzpatrick was injured on a second-quarter hit in Sunday’s 20-16 loss to the Los Angeles Chargers. He was replaced by Taylor Heinicke, who will start Thursday’s game vs. the New York Giants. Heinicke completed 11 of 15 passes for 122 yards and a touchdown Sunday.

In three games with Washington dating to last season, including one start in a playoff loss to Tampa Bay, Heinicke has completed 62.8% of his passes for 565 yards, three touchdowns and one interception. He has a 50.1 Total QBR in those seven quarters of action. He last started a regular-season game on Dec. 23, 2018.

Kyle Allen will serve as the No. 2 quarterback. Kyle Shurmur was signed to the practice squad.

Change at this spot is nothing new for Washington. Because of injuries or ineffectiveness, it used four different starting quarterbacks in 2018, three more a year later and then three in Rivera’s first season.

“It’s the nature of the game,” Rivera said. “Unfortunately it’s happened more than it needs to have in the last season and a game. I hope we get a streak where we keep guys on the field for a long time and benefit from their abilities.”

After failing in an attempt to trade for Matthew Stafford, Washington signed Fitzpatrick in the offseason because it liked his veteran knowledge and felt he was still improving at age 37. It did not want to mortgage its future to acquire a quarterback in the draft when it became clear none would be available with the 19th pick in the first round.

Washington’s plan has been to be more aggressive pursuing a quarterback when it feels confident in the roster around that position.

For now, the team must win despite another injury at the position. Rivera called the situation “frustrating.”

“We like the guys we have; they’ve done good things for us. We’ll see what happens,” he said. “I’m as confident as I could be.”