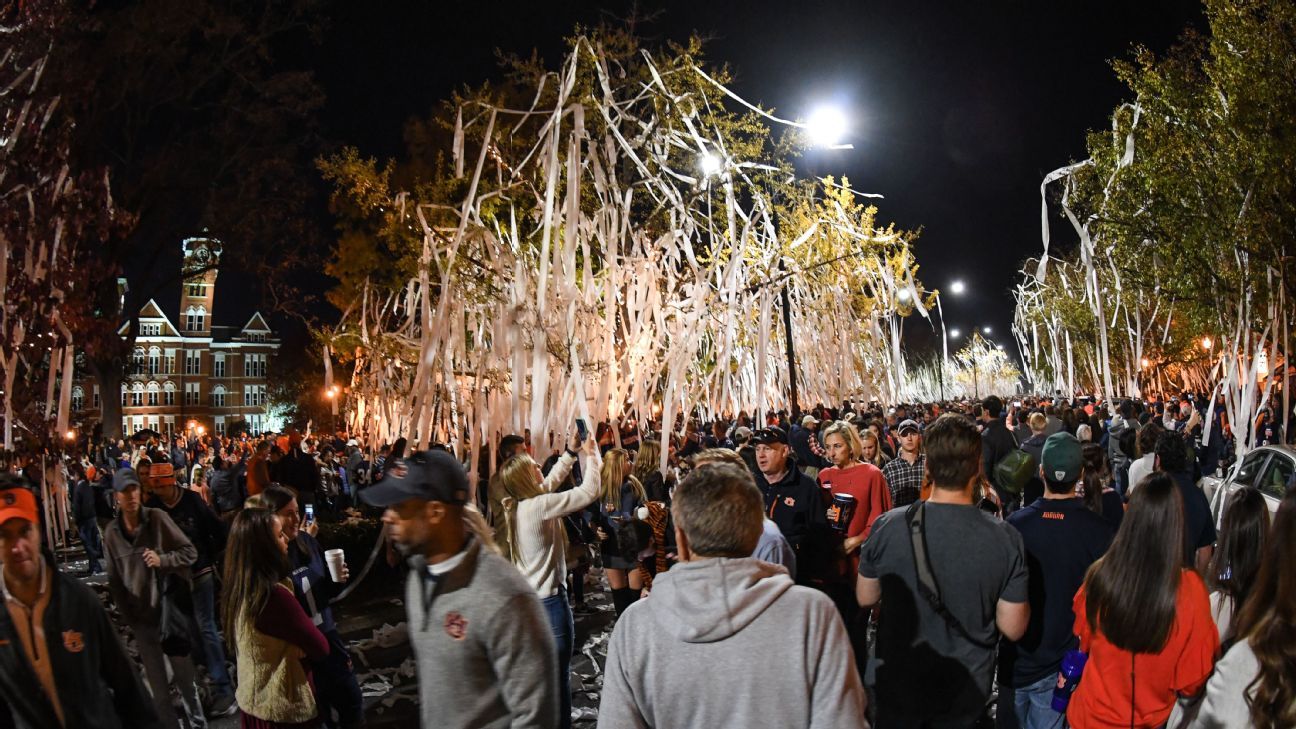 It’s been two weeks since Georgia and Clemson met on the field in one of the best nonconference games of the season. The Bulldogs won 10-3, but how does their home — Athens, Georgia — stack up against the Tigers’ town up north: Clemson, South Carolina.

This off-the-field matchup is one of eight in the Football Town Showdown as fans will decide which college town across the country is supreme. From fierce rivalries such as Auburn, Alabama, against Tuscaloosa, Alabama, to nuanced matchups such as Ames, Iowa, against Baton Rouge, Louisiana, the 16-team field brings a little bit of everything when it comes to college football culture.

Does State College’s ice cream from the Creamery outweigh Ann Arbor’s Big House? How does the view of the Appalachian Mountains in Boone compare with the ongoing party at The Grove in Oxford? And what’s the better tune: “Rocky Top” or “Enter Sandman”? It’s up to you, the fan, to decide which college town is football’s best this fall.

Auburn, Ala. vs. Tuscaloosa, Ala.

Why Auburn is a great college town: They don’t call it the Loveliest Village on the Plains for nothing. While the city has certainly grown in recent years, it has done a good job of retaining much of its small-town charm. The redbrick buildings, the massive oaks and quaint downtown feel like stepping back in time. But where Auburn has improved the most in the past decade is its food scene. Don’t get me wrong, old standbys such as Amsterdam Cafe are excellent and worth visiting. But newer restaurants such as Acre and The Hound have stepped up and elevated the entire food scene. — Alex Scarborough

Why Tuscaloosa is a great college town: You can get a fabulous pork chop at Five and great sushi at Chuck’s, but the real appeal of a visit to the home of the University of Alabama is the sense of college football history it offers. At the Waysider, you can eat biscuits and gravy where Paul “Bear” Bryant once sat. At the Bryant Museum, you can see scores of football artifacts, even a Waterford crystal replica of the Bear’s famous houndstooth hat. And, as you head into Bryant-Denny Stadium for kickoff, you can stroll through the Walk of Champions, the home to statues of Bryant and Gene Stallings and every other Bama head coach to win a title, Nick Saban included. — Scarborough

Why Boone is a great college town: It isn’t easy to get to the home of Appalachian State, but visitors are greeted by breathtaking views of the Appalachian Mountains once they’re there. Few college towns in America offer more for students to do than Boone, which sits in North Carolina’s High Country. With skiing at nearby slopes in the winter, whitewater rafting in the summer, and hiking and camping in between, Boone is one of the most popular outdoor destinations on the East Coast. The Blue Ridge Parkway offers students an easy route for weekend getaways. And the Mountaineers aren’t bad at football, either. Just ask Michigan. — Mark Schlabach

Why Oxford is a great college town: The Grove, complete with majestic oak trees and sprawling green grass in the middle of campus, is legendary for its tailgating. Talk about one big party. It never gets old, no matter how good or bad Ole Miss‘ football team is that season. And if you want to go back in time, check out the Square just off campus, where eateries such as Ajax Diner offer the finest in true Southern soul food, and about 20 minutes outside of town, there’s Taylor Grocery. Get the catfish! Oxford is hardly a big city. The university is very much the heart of this cozy town of 28,000 people, and there’s a feeling of nostalgia, anticipation and good old-fashioned fun any time the Rebels are home at Vaught-Hemingway Stadium. — Chris Low

Why Boulder is a great college town: Sitting at the base of the Rocky Mountains, Boulder has a natural beauty few college towns in the country can hope to compete with. And that’s before factoring in a food and drink scene that is worth making the trek at any time of year. As a combination, it’s a vacation-worthy destination even without football in the equation. On game days, though, Boulder comes alive. The crisp fall weather oozes football and adds to the buzz as the day builds toward kickoff. — Kyle Bonagura

Why Morgantown is a great college town: West Virginia’s rolling hills on the banks of the Monongahela River set it apart from the many Big 12 schools residing on the plains. This is one of college football’s great tailgating spots, notable for pepperoni rolls and a long, proud tradition of moonshine available in all different flavors. Classic college bars such as Kegler’s and Mario’s Fishbowl are rowdy, and singing along with 60,000 or so friends to “Country Roads” after a big win will cap the experience — unless you stumble across a couch or two getting burned afterward. — Dave Wilson

Why Ann Arbor is a great college town: Ann Arbor is your quintessential college town with everything from a great game-day atmosphere to food and restaurants galore and a beautiful campus sprawled across the town. Nearly everything is geared around the university and even those who reside in Ann Arbor but are not attending classes are still part of the college town feel. On any given game day, you can walk from downtown to the stadium and see the support the community has for the football program and the university. — Tom VanHaaren

Why State College is a great college town: State College is an oasis in the middle of Pennsylvania. It’s far from most of the major cities, but once you get on campus, it’s like very few in the country. On any given Saturday, the Creamery will have a line of eager fans wrapped around the block waiting for the famous ice cream. Those fans meander through tailgates and parties to eventually arrive at the stadium, and the focus on those Saturday afternoons is all about the football team. — Tom VanHaaren

Why Athens is a great college town: With its unrivaled music scene, eclectic food and famous nightlife, the Classic City is a smaller version of Austin, Texas, or Oxford, Mississippi, on steroids (only better). The town that gave us R.E.M., the B-52s, Widespread Panic, Drive-By Truckers and so many other musical acts once offered visitors 80 bars in 1 square mile — more than any other city in America — and it has only gotten better with the addition of local breweries. And the best part is it’s all within walking distance of the UGA campus. Indeed, before Mark Richt and Kirby Smart arrived to coach the Bulldogs, Athens was the party town with the football problem.– Schlabach

Why Clemson is a great college town: Clemson is a college town in every sense, starting with the fact the university is located in Clemson, S.C. Everything in and around Clemson essentially revolves around the school. Orange tiger paws are marked on the roads leading to campus. But beyond the relationship between the town and the school, Clemson has the best traditions, paired with iconic local establishments known beyond its borders. Watching Clemson players and coaches touch the Rock and run down the Hill has to be on every college football fan’s bucket list. So does a beverage or two at the local Esso Club before or after kickoff. — Andrea Adelson

Why Baton Rouge is a great college town: The vibe in Louisiana is different from anywhere else. The Cajuns are serious about their food, their drinks and their football. And all those things collide beautifully in Baton Rouge, which is home to more than its fair share of quality bars and restaurants. But to truly appreciate the city, you have to see it come alive on game day. You have to walk the campus, visit Mike the Tiger and drop into as many tailgates as you can, trying any cup of gumbo you happen to be offered. Chances are it’s going to be good. The pregame energy is palpable, and the stadium experience is arguably the best the sport has to offer. — Scarborough

Why Ames is a great college football town: College students make up about half the population of Ames, so they’ll keep you young there. The Cyclones faithful are some of the most devoted in the country. At 6 a.m. on game day, they’re already singing at the Tip Top Lounge and RVs and buses are lined up outside Jack Trice Stadium. The tailgating scene is tremendous, with food and drink — especially their beloved Busch Light — everywhere. The fans appreciate a winner but don’t spew vitriol after a loss, and they stick to their motto: “Win or lose, we booze.” Nearby Welch Avenue has a bustling bar scene in an area known as Campustown. — Wilson

Why Blacksburg is a great college town: Tucked into the northern Blue Ridge Highlands region of Virginia, Virginia Tech is not only a beautiful spot to hang out on a college football weekend but also provides one of the coolest game-day experiences in the country. Don’t believe me? Google “Enter Sandman” before the season opener against North Carolina. A sea of orange fans jumped up and down in time to the music, roaring as soon as the Hokies entered the field. It’s a tradition that ranks among the best in the nation. No trip to Lane Stadium is complete without a turkey leg, smoked right there in the stadium, to the delight of all who have waited in line since they started being offered more than 20 years ago. — Adelson

Why Knoxville is a great college town: Neyland Stadium famously towers above the banks of the Tennessee River, making it one of the few on-campus stadiums in college football accessible by both land and water (Washington and Baylor are others). The site of the Vol Navy pouring in on a Saturday afternoon is topped only by “Rocky Top” blaring across campus as orange-clad tailgaters revel in the pregame and postgame festivities. And right there close to campus is every type of restaurant and watering hole imaginable, both on the Cumberland Avenue Strip and in the refurbished Market Square and Old City areas. The Smoky Mountains hovering in the distance combined with Knoxville being one of the biggest cities in the state of Tennessee make it a prime location to soak in the sights and sounds of college football. — Low

Why Madison is a great college town: You won’t truly know how beautiful Madison, Wisconsin, is until you see it for yourself. If you’re driving in from the east, you will eventually split through Lake Mendota and Lake Monona, which set the scene for the city, making it look like a real-life postcard. Once on campus, people flock to Mickie’s Dairy Bar for an old-fashioned breakfast or are spread across the town, eventually converging at Camp Randall Stadium. — VanHaaren

Why Pullman is a great college town: At just shy of 33,000, the capacity of Martin Stadium is relatively small, but just looking at that total misses important context. The stadium, which sits as the centerpiece in the middle of campus, is nearly big enough to host Pullman’s entire population and roughly two-thirds of Whitman County. On the West Coast, where most large football-playing schools are in urban environments, Pullman is unique. It’s truly a college town — Washington State is its largest employer — and it swells with visitors from all over the state as tailgating and other pregame activities pop up all over town.– Bonagura