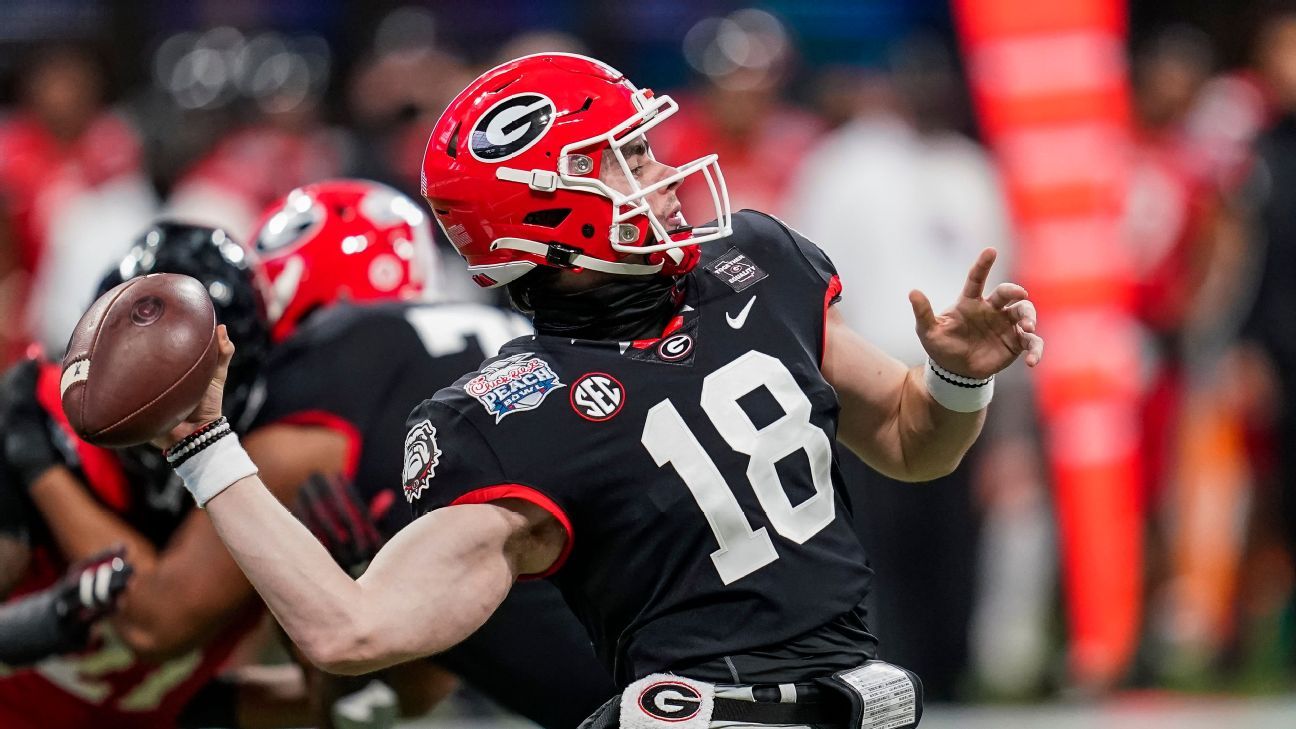 Let’s imagine the 12-team playoff format was implemented now. What would the playoff landscape look like as we head into the 2021 season? How would it be different?

Each week during the college football season we use this space to break down the playoff race, using the Allstate Playoff Predictor. Most of the time, we’ll be talking about the actual playoff race taking shape — and you can always find our projections here and, this year, even input scenarios into the Predictor yourself. But before we dive into this season we wanted to check in on what very well could be our future: a 12-team playoff.

So we outfitted the Allstate Playoff Predictor to also make hypothetical projections based on the latest proposal in June: a guaranteed bid for the six-highest ranked conference champions, plus six at-large bids, with the four highest-ranked conference champions receiving a bye. To make these projections, we’re working under the assumption that the committee would draw distinctions between teams in the same way they do for a four-team playoff. After all, the Playoff Predictor’s role is not to say who should make the playoff, but who would make the playoff.

Let’s break down some takeaways from this alternate, 12-team reality.

There are real preseason playoff locks

As much as it feels like Alabama is currently destined to make the playoff every year, we know it is not. The fragile nature of a resume worthy of consideration means that even for the Crimson Tide, the season can go askew. In our current setup Alabama has 73% chance to reach the playoff, but that would balloon all the way up to 97% in a 12-team format, a virtual certainty.

And they wouldn’t be alone: Clemson and Oklahoma would join the Tide with a 97% and 96% chance of making the playoff, respectively, with the Ohio State right behind at 92%.

Of course, that would not mean the regular season is meaningless, even for those teams. Because an advantage of the 12-team format is that it provides incentive at the top of the standings, too, in the form of a bye. For a team like Clemson, its chance at a bye (79%) is similar to its current playoff odds (77%). But for Alabama that is not the case, because the Tide play in the SEC — which they are less likely to win. Therefore, Alabama’s chances at a bye in the new format? All the way down at 53%. So Nick Saban’s team might be all but guaranteed a spot in the playoff, but there’s a coin-flip chance they’d be playing in the first round.

Best chance to reach the CFP in 12-team format

57 teams, to be precise, would have a 1% shot at the playoff in a 12-team universe. This is a big appeal, right? As it currently stands, fans of, say, Fresno State, know there’s no path to the playoff. But in a 12-team world? There’s a 2% chance … which is a whole lot better than nothing. From Buffalo to Arkansas, there would be a whole slew of schools currently without a prayer of the playoff going to, well, a prayer. In a four-team format there are just 19 teams with a 1% chance to reach the playoff as of this writing.

Whose playoff chances would the changes help the most?

There’s a couple ways to look at this.

First, if we want to see simply which team’s playoff chances increase the most, we can do that — and no one jumped more than Georgia, who made a 52-point jump from 28% to 80% chance. That makes sense: Georgia clearly has the quality of a top-12 team but has some structural roadblocks (the SEC) in its way. That means actually putting together a playoff-quality resume under the current system is going to be difficult even for a particularly good team like the Bulldogs.

The rest of the list follows a similar pattern: Texas A&M, Miami, Notre Dame and Iowa State are all — with the exception of the Fighting Irish — second- or third-string within their own conference. They might be good teams, but they currently have to leapfrog an Alabama, Clemson or Oklahoma to get into the playoff. A 12-team format dramatically changes their outlook.

Change in chance to reach playoff

At the same time, you can make a case this matters just as much, if not more, for schools who barely had any shot at all. If we look at the largest ratios of new playoff chance to old playoff chance, a bunch of Group of 5 schools shoot up to the top of the list. The current format makes it brutally difficult for a Group of 5 team to reach the playoff, but in a 12-team playoff, Cincinnati becomes the favorite to take that sixth conference championship spot.

The chart below indicates that Cincinnati‘s chances of reaching the playoff are 170 times greater through this new format and that UCF is over 1000 times more likely to make it. Of course, that’s simply because the Bearcats have, in Playoff Predictor’s view, barely any chance to reach the playoff in the current setup. I wouldn’t get too caught up in the literal number here — we never try to rely on Playoff Predictor to draw distinctions between a .1% chance and a .01% chance, so the astronomical ratios themselves aren’t that important — and focus more on the fact that the impact is significant for these schools.

Change in chance to reach playoff

How would this affect the national championship chances for top teams?

We don’t have playoff simulation numbers just yet, but it’s pretty clear this would hurt the very top teams in the sport in terms of their chances to win it all.

Let’s take a team like Clemson: If the Tigers season goes well enough that they earn a playoff bid in the current format, they would still have to play an extra game in the new format even with a bye.

While it’s true that about 20% of the time Clemson would not make the current playoff format but would reach the playoff in a 12-team format, in those scenarios the Tigers would have to play two extra playoff games against top-12-ish teams. It’s unlikely that would be would be a worthwhile trade-off for Clemson strictly in terms of chances to win the national championship.

For Alabama, the effect is even more severe since there are a decent number of simulations where they would currently make the playoff without winning the SEC championship, meaning they would not earn a bye in a 12-team format.

Paul Sabin and Lauren Poe contributed to this article.