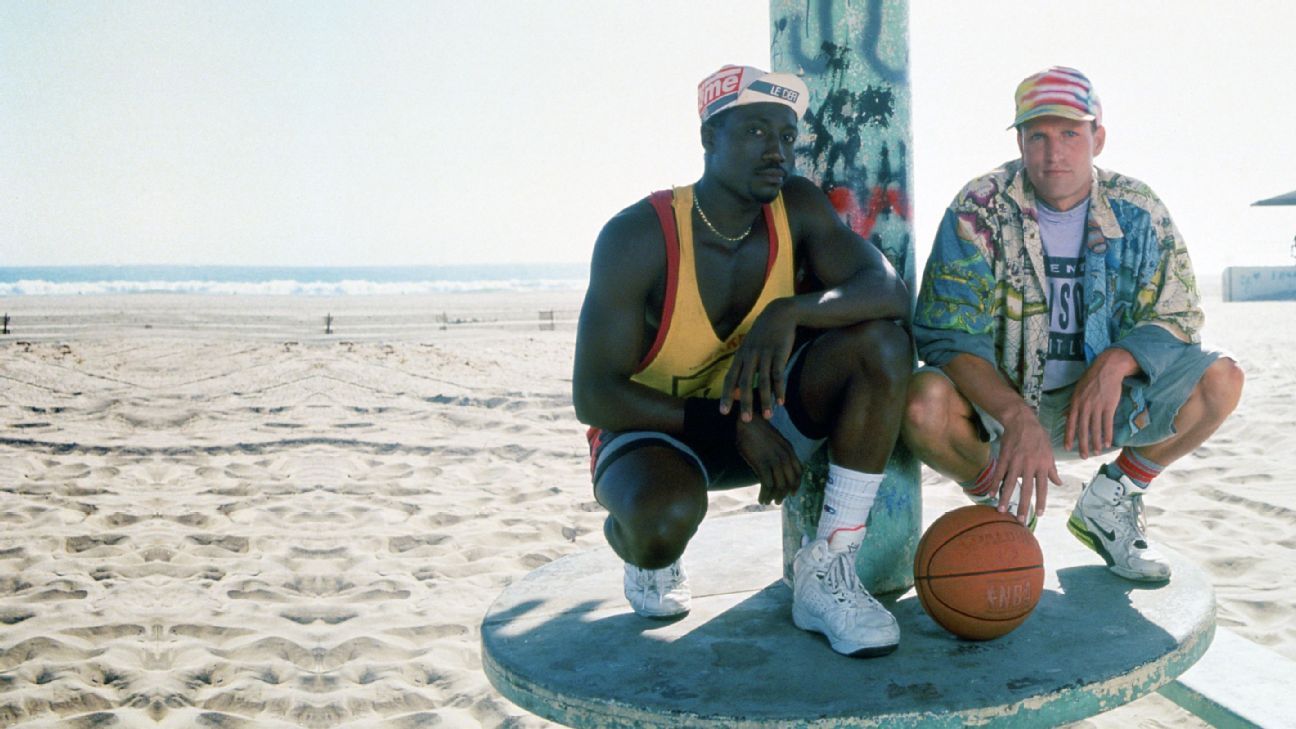 The 1992 movie starred Woody Harrelson, Wesley Snipes and Rosie Perez. It’s about street basketball and hustling in Venice Beach and Crenshaw in Los Angeles. The late critic Roger Ebert said it was “not simply a basketball movie.” It went on to become one of the most beloved sports movies ever.

Director Ron Shelton had sports-movie chops. Prior to “White Men Can’t Jump,” he wrote and directed “Bull Durham,” a movie for which he was nominated for an Academy Award for best original screenplay. He also directed “Cobb,” “Tin Cup,” and the ESPN 30 for 30 documentary “Jordan Rides the Bus.”

“I just always wanted to do an L.A. story,” Shelton, who grew up in Santa Barbara, California, told ESPN, “All of L.A. was my playground cause I played basketball and baseball in high school in college. …

“I also love playground basketball. So what happened was, I realized that they were the same story.”

In honor of the anniversary, SC Featured spoke to the makers of the move. Here’s how this classic got made and a few things you might not know about “White Men Can’t Jump.”

Only real hoopers making the movie


Shelton wanted the actors to be able to play. He cast Kevin Costner in “Bull Durham” because of his athleticism and a background of playing baseball. Shelton held basketball tryouts with actors auditioning for the roles of Billy Hoyle and Sidney Deane. The tryouts included former pro players to help see who could play.

Ron Shelton (director): So, it was open call, come out and throw out a basketball. There was all kinds of stars that came. … I knew the guys that could play, like Duane Martin. … So Duane’s 8×10 [actor’s audition photo] was in a Knicks uniform. I thought, “This guy could play.” And, and I would say, “Duane, go embarrass that guy.”

Martin, who played college basketball at NYU, signed as an undrafted free agent with the New York Knicks but never played an NBA game. The film also included former players Cylk Cozart and Marques Johnson. Johnson might have been the best player. He was an All-American at UCLA and was on coach John Wooden’s last national-title team. He was also a five-time NBA All-Star. Landing the lead parts was not going to be easy. Charlie Sheen had been the first choice to play Billy but turned down the role.

Shelton: Duane Martin kept stealing it and slamming, and these guys would go down the court and they’d disappear. And then, and then the agents would call and say, “He didn’t get a fair chance.” I said, “You do not want to embarrass your boy again.”

Woody Harrelson (Billy Hoyle): I remember playing those games. And I’m like, well, I’m going to play as good as I can play.

Wesley Snipes (Sidney Deane): In the black actors’ community, the word is going around that all the actors are being called in to come and play. And so finally, when I got the call to come and play, I realized like, wow, it’s been a minute. I had a good handle, had a good mouth, good talk. But everything I threw up was a brick during the audition.

The chemistry between Snipes and Harrelson, who at that point had been in another sports movie — “Wildcats” — made the difference. However, that alone wasn’t going to cut it. The actors went to a training camp run by former Loyola Marymount coach Dick Baker and Princeton player Rob Ryder.

Snipes: That was a very ego-correcting experience for me.

Harrelson: That was humbling.

Snipes: I didn’t have a layup. And then when I would take a shot, there was no rotation on the ball.

Marques Johnson (Raymond): Wesley had a hard time executing a three-man weave. And so one of the things that Dick Baker said — one of the edicts was that, if you mess up, you gotta go again. So if you went with Wesley Snipes, you might wind up going five, six, seven times, up and down the court on these three-man weaves. ‘Cause he just couldn’t get pass and go beyond, pass and go beyond. And so what happens is that, whenever you got to the front of the line, and Wesley Snipes was your partner, one of the three guys to go with you, you know, you — you would invariably come up with an excuse not to go with him.

Here are a few of the now-classic sneakers worn in the movie.

These shoes were also worn by Scottie Pippen during the Chicago Bulls‘ 1991 NBA title run and as part of the 1992 Olympic basketball team.

These were the signature shoes of San Antonio Spurs star David Robinson. Nike reintroduced them in 2014.

Raymond, is that you?

One scene early in the film, after Billy and Sidney have started hustling together, is what Shelton calls, “a funny scene, but also underneath it, there’s the lurking danger of streetball and male egos.”

Sidney and Billy pretend they don’t know each other to hustle Raymond. When the duo wins, Raymond is furious, brandishes a razor blade and says he is going to shoot them. According to the filmmakers, part of the scene is based on a true story.

Shelton: That scene came from a very specific place because I was playing in a part of Hollywood on Cahuenga that was very rough. It was outdoor courts, but really good ballplayers. And I’d play Monday, Wednesday, Friday afternoon after writing in the morning. I was actually writing Bull Durham and I was playing basketball in the afternoon that led to this movie. I went over one afternoon, and it was locked up with chains. There was an old guy sitting there, and I said “what happened? What happened to the courts?”

And he goes, oh well, the city locked them up for a while ’cause, uh, you know Raymond? Yeah, I know Raymond. He says well, Raymond went to the glove box. … When you go to the glovebox, it means you’re going to get a gun. That was a street term. Why? He said well because there was an argument over a foul. Was it a charge or a block? And basketball players know it’s always a charge or block call. I said what happened. He said he shot the other guy dead.

Harrelson: If it’s me, as soon as that guy starts going for the car I go you’re right. It was definitely a foul. My fault on that.

Shelton: And that was the great Marques Johnson who’s not an actor … but he was fabulous in that scene. He’d never been in a movie.

Johnson, however, turned to method acting to land the role of Raymond and brought his own props.

Johnson: My dad is a professional barber. … He keeps a stash of straight razors in his barber box.

So I go in for the audition. It gets to the scene with Wesley Snipes, when I have to pull out the blade. I pull out this real razor, and I do this one-handed maneuver to open up that razor. And I chase him around the audition room. And Ron Shelton says, “You got the part. You got the part. But goddamnit, leave that razor at home. You’re gonna hurt somebody. We’ve got prop razors for that.”

White men can jump … sort of

Harrelson: [Johnson] was really good. I remember we used to do, uh, bets on the side when we were like almost like playing horse. And boy did I lose a lot of money.

According to the actors and crew, there was a lot of gambling. On pickup games, shots for the film, whatever it was, oftentimes there was money on it. In one of the final scenes of the movie, Billy and Sidney bet on whether Billy can actually dunk. Harrelson claimed he could actually dunk and would do so for the shot.

Johnson: And so the basket was at ten feet. Woody had been walkin’ around with these strength shoes — these strength shoes have, like, a — like, a big, gigantic pad on the ball of your feet, and then nothin’ on the heels. So you’re walkin’ on your calves the whole time. So Woody’s got these strength shoes on. He’s preppin’ to get this dunk down on the ten-foot basket. So we get to that part of the scene he’s got to dunk. And he’s nowhere close.

Snipes: And we had a side bet going on.

Harrelson: Yeah, we had a side bet, which kept growing.

Johnson: Ron Shelton’s like, “We gotta lower this thing, Woody. We don’t have all night.” So Woody’s, like, “No — no, whatever you do, don’t lower the basket. I know I can do it. I’ve done it before. I’ve been workin’ on this for the past couple of months.”

Johnson: Woody leaves and goes to his trailer. So my favorite line is Ron Shelton. It’s, like, “Take that thing down to nine and a half feet, please.” And so — they did, and Woody came out and dunked.

Shelton: I recall, as the bet was being upped, the rim was being lowered.

Harrelson: Then we upped the bet a little bit, and uh, oh my God. I’ll never forget [Snipes’] face when I slammed that.

Snipes: Ron, you were the co-conspirator, man. … You set me up.

Shelton: Yeah, gradually. I was.

Harrelson: I didn’t realize. I thank you for that, by the way.

In 2017, it was announced that a remake was in the works. Kenya Barris, the creator of the ABC show “Black-ish” will write and produce the project. The movie is also being produced by Brooklyn Nets player Blake Griffin and former Carolina Panthers and New York Jets center Ryan Kalil. In March, it was announced that hip-hop star Jack Harlow will take on Harrelson’s role.

Harlow can hoop. He has played in the NBA All-Star Celebrity Game. That doesn’t mean the makers of the original have to like it.