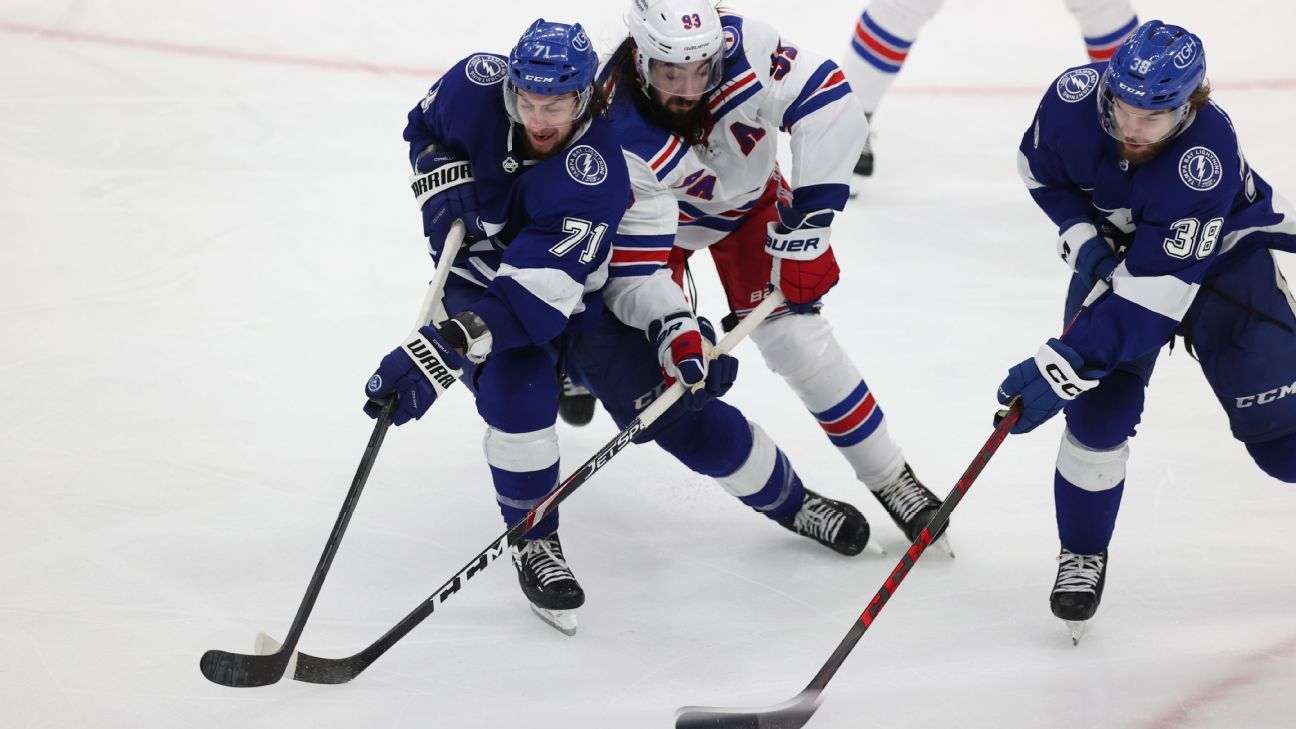 The Colorado Avalanche await the winner of the series, which could be the Lightning following Saturday night’s game. What does Tampa Bay have to do to close it out? What will New York do to counterpunch? We break it all down here.

What do the Lightning need to do to close this series out?

Emily Kaplan, NHL reporter: The Lightning are back to their dominant form after a sluggish start to the series. That nine-day layoff between series was no joke — and I’m sure we’ll be talking about it for Colorado when the Stanley Cup Final begins.

The biggest change for Tampa Bay is puck management. The Lightning were forcing things when it wasn’t going their way, trying to manufacture something out of nothing, and they’ve cleaned that up since midway through Game 2 (the turning point in this series). They need to continue boxing out Rangers players in front of goalie Andrei Vasilevskiy — because as long as Vasilevskiy gets clean looks, he’s stopping nearly everything — and keep generating quick breakouts from the defensive end.

These guys are becoming the kings of late-game dramatics, scoring three game-winning goals with under two minutes remaining this postseason. Ondrej Palat has scored two of those goals, and as he told me after Game 5: If they play the way they did in Game 4, they feel confident they can close this out at home.

Arda Öcal, NHL host: In the first two game of this series against the Rangers, they looked sluggish, but the long layoff between series and the pep in the Rangers’ step likely had something to do with that. Now? It looks like they’re right back to their dynastic ways.

Game 6 truly felt like a “playoff game” in how stingy both defenses were, and Tampa Bay looked particularly solid defensively throughout much the game. If that keeps up, the Lightning match New York in speed and Vasilevskiy has another great performance, this one could close out in six.

Kristen Shilton, NHL reporter: Tampa Bay weathered an early storm (no pun intended) with the Rangers, who were coming in on a high from that Game 7 victory over the Carolina Hurricanes in the second round. The last-minute goal Tampa Bay scored in Game 3 really swung momentum back their way, and New York hasn’t recovered.

The Lightning have remained calm under pressure, never letting the ups and downs dictate their level of confidence. That’ll be key again in finishing off New York. The Lightning’s defensive habits have really improved over the past couple games; they’re taking some of the load off of Vasilevskiy to bail them out; and even if they aren’t generating a large volume of goals, they’re scoring when it matters most.

To close this thing out on Saturday, look for more timely contributions from Tampa Bay’s depth of talent and expect Vasilevskiy to shut the door once more. More than that, count on coach Jon Cooper behind the bench to use home ice to his advantage — and hide a trick or two up his sleeve to keep the Rangers off balance.

Greg Wyshynski, NHL reporter: Cooper has explained why this series had turned out the way it has. The Rangers had the better of the play in Games 1 and 2 because the Lightning weren’t physically and mentally sharp following a nine-day layoff between rounds. He knew the layoff hurt Vasilevskiy the most, and he has been their best player since Game 2, owning a .956 save percentage (86 saves on 90 shots against) over the past three games of series.

When the Lightning committed 48 turnovers combined in the first two games of the series, the coach — loudly and emphatically behind the scenes — reminded them not to make plays that aren’t there. They’ve committed 29 total in the past three games. They’re getting better as the series has progressed, while the Rangers are looking physically worn down.

Continue their mastery at 5-on-5, in which the Rangers have two goals since the first period of Game 2, and stay out of the penalty box as they have the past two games, and the Lightning will punch their ticket to Denver.

What should the Rangers do to counterpunch in Game 6?

Kaplan: As former Rangers player Brandon Dubinsky suggested on Twitter: Maybe we need a Mika Zibanejad guarantee. But that doesn’t feel fitting of these Rangers, who never get too low after losses or high after wins. Their steadiness throughout these playoffs has really impressed me, especially for such a young team.

Adam Fox told me last round that maybe it’s the team’s naïveté — the players don’t let the moment overwhelm them. It explains how they are 5-0 in potential elimination games this postseason. They have played their best hockey when there’s no tomorrow. Very few teams can say that.

To win Game 6, the Rangers need to do all of the little things that made them successful in Games 1 and 2: win the puck battles on the boards, which prevents the Lightning from establishing their forecheck, get a bunch of pucks on net (and get more traffic in front of Vasilevskiy) and let Zibanejad do his thing on the power play instead of with quotes to the media. That’s their style.

Öcal: As the slogan goes, there’s no quit in New York. They were down by multiple goals in elimination games twice against the Pittsburgh Penguins but rallied to win three straight elimination games. They were the only team to beat the Hurricanes at home (and eliminate them from the playoffs).

They now face “Mr. Series-clinching” Andrei Vasilevskiy, who has six career shutouts in these types of games, but … “There’s No Quit in New York!” If there’s a scenario in which one team could get up from the mat and force a Game 7, it’s these Rangers this postseason.

Shilton: New York was the first team in this postseason to beat Carolina at home, and it did it in a Game 7. A do-or-die moment doesn’t exactly intimidate these Rangers. That’s the energy worth channeling into Game 6 against Tampa Bay. New York did well early in this series by keeping the puck away from Tampa Bay’s top skaters and jumping on the Lightning offensively to disrupt their rhythm. Making Tampa Bay uncomfortable isn’t easy, but New York did have some success at it and got the results to match.

Challenging the Lightning physically, firing pucks on Vasilevskiy and establishing a good forecheck will all help New York take this series home. The most important factor, though, will just be to maintain a belief that no matter what the Lightning have accomplished in the past, it doesn’t necessarily dictate the future. The Rangers have to avoid sabotaging themselves with too many thoughts of Tampa Bay’s championship history.

Wyshynski: You know that rejuvenation tank that Boba Fett uses to heal himself? They need that. Well, and some power plays.

The Rangers have played a lot of hockey and expended a lot of energy this postseason, with two seven-game series that required them to rally on multiple occasions. Throughout the lineup, you’re starting to see little mental errors that come with fatigue and physical wear-down. It’s a testament to their fortitude that two of the past three losses were “one shot away” games, lost at the end of regulation.

So, about that Game 6 counterpunch: The Rangers need goalie Igor Shesterkin to limit the Lightning to one goal or fewer, and they need to score that extra one that they’ve been unable to get in the past three losses. The best path to that is on the power play, in which the Rangers still lead the playoffs in efficiency (31.5%) but have had only 3 minutes, 15 seconds of power-play ice time combined in the past two games. Forward Andrew Copp told me that “you can’t rely on that,” but if they’re going to win Game 6, they kind of must.

Kaplan: The Rangers will play tight and desperate, but I think the Lightning close this out on home ice 3-1. The last goal is an empty-netter.

Shilton: New York has really exceeded expectations in these playoffs. But I like Tampa Bay at home. Lightning, 4-2.

Wyshynski: Lightning, 4-1. There remains “No Quit in New York.” It’s just that the Lightning will have reached the mandatory four victories, meaning that the series is over as well as the Rangers’ season.