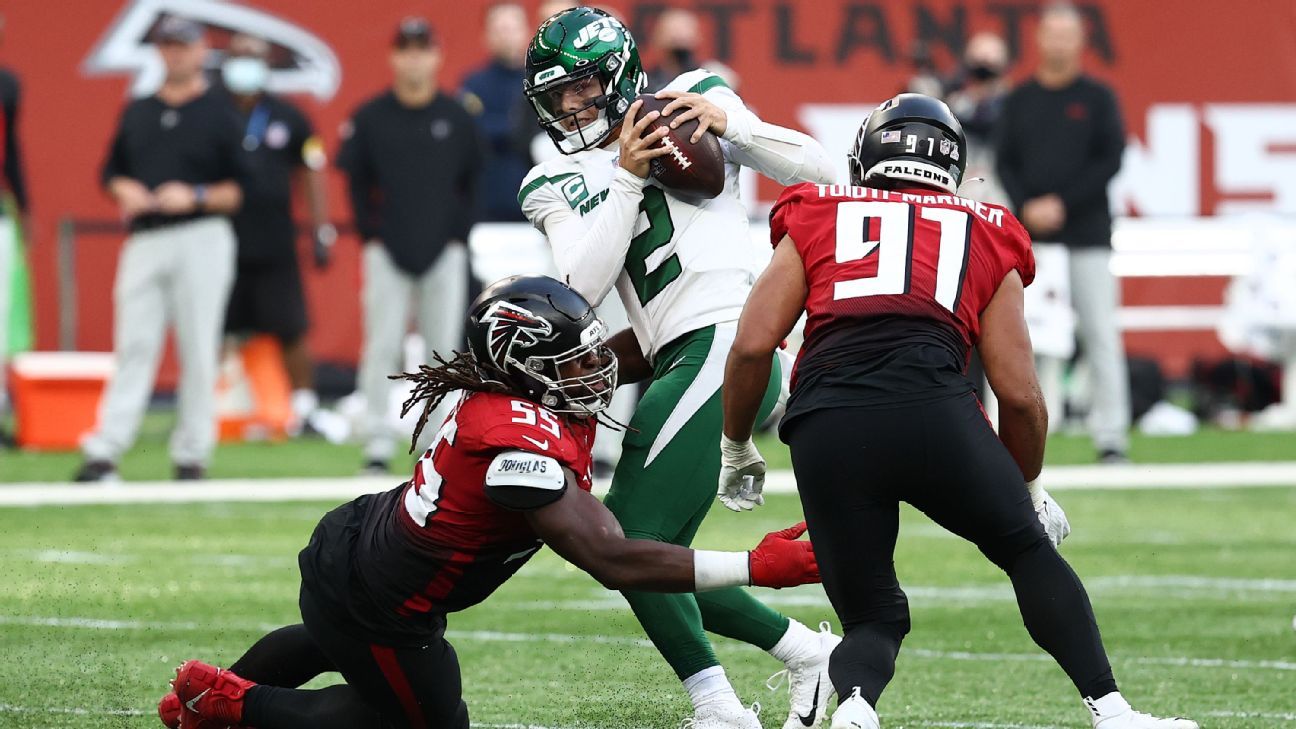 Week after week, it’s the same story: The New York Jets‘ offense doesn’t show up until the second half. It’s really starting to frustrate quarterback Zach Wilson, who indicated Sunday there’s a “confidence issue” and it’s “crushing us” because of early deficits.

The Jets, who fell to 1-4, trailed at halftime, 20-3, managing only 80 total yards and five first downs. They were so out of sync that Wilson, on a screen pass, hit right tackle Morgan Moses in the back of the head with an errant pass.

It continued a maddening pattern, as the Jets have been outscored in the first half 75-13. They became the first team since the 2015 San Francisco 49ers to score seven of fewer points in the first half in each of its first five games. Wilson (19-for-32, 192 yards, one interception) blamed himself.

“We have to come out slinging it from the beginning,” he said. “I have to come out and just throw that thing and make the right reads. I missed some throws. I can’t come out and miss throws. They’re not throws that are hard. The coaches are putting us in a good position. We just have to get some momentum going.”

Wilson, named the NFL Rookie of the Week after his breakout performance in Week 4 against the Tennessee Titans, had only 65 passing yards with 9:30 left in the game. While he has proven he can make spectacular, off-script plays, he still struggles with so-called easy throws from the pocket.

“It’s very easy to stand at the driving range and hit 300-yard drives,” coach Robert Saleh said. “It’s can you do it when you’re in the tee box and you have water on your left and sand on your right. That’s something he has to work on and the coaches have to work on.”

Saleh acknowledged the Jets “have to start faster, and I’m putting that on me to try to figure it out this week” — a bye. Wide receiver Corey Davis said players need to relax.

“We know we’re better than 1-4,” he said. “That’s what the energy is like in the locker room. Dudes are disappointed, angry. There’s all types of emotions.”

The Jets went three-and-out on their first two possessions, and Wilson was intercepted on the third possession. By then, they were already down 17-0. The passing attack was conservative, but that’s because the Falcons (2-3) played a lot of two-deep safety looks, according to Saleh.

In that case, the Jets should’ve been able to run the ball against lighter boxes, but they didn’t do that very well, either. They rushed for only 64 yards, including a touchdown apiece by Michael Carter and Ty Johnson.

The wide receivers struggled, too, as starters Davis, Jamison Crowder and Elijah Moore combined for only 10 catches, including only three in the first half. Moore, a rookie, was shut out and was targeted only twice in the game. Wilson was perplexed.

“I don’t know what it is,” he said of the slow starts. “We have to figure that out this bye week, how to fix that. I have to play better at the start as well. It’s interesting. In the second half of every single game, we’ve looked real good. We know what we’re capable of and we’re able to show it at the end. … Starting three-and-out is no way to do it.”

The Jets closed to within 20-17 on Carter’s touchdown with 6:55 left in the game, but the defense — gassed at that point — promptly surrendered a 75-yard touchdown drive to seal the loss.

First-time offensive coordinator Mike LaFleur is taking a lot of heat for the struggles. In last week’s win over the Titans, the biggest plays came on improvisation by Wilson. Saleh defended LaFleur, saying he called “an aggressive game” in London. With early deficits, the Jets are putting entirely too much pressure on their young quarterback. “We have to get going,” Wilson said. “I have to make plays. We have to get this offense going.”