He wants the 1-3 Colts to win, but he wants to do it his way, which has been building the roster through the draft and being selective when it comes to free agency and trades. Not an “instant coffee” approach.

But while patience is Ballard’s approach, the Colts’ fan base is left wondering when those efforts will be reflected in wins and a deep playoff run.

Since Ballard was hired in the winter of 2017, the Colts are 33-35, including 4-12 in his first season, when he had to clean up the roster left behind by the previous regime. The Colts have been to the playoffs twice during that span, but they have not come close to being Super Bowl contenders.

The pressure is staring at the Colts on a daily basis. Owner Jim Irsay has publicly said over the years that he wants to win multiple Super Bowl titles. Those are lofty expectations from an owner whose franchise has been to two Super Bowls since moving to Indianapolis in 1984.

“I truly believe this football team is on the doorstep of great things, and that’s because of the culture both [Ballard and coach Frank Reich] have cultivated in their time with the Horseshoe,” Irsay said in August. “Whether we are marching toward the playoffs or facing adversity, whether we are building our roster or making a difference in the community, we have the ideal leaders in Chris and Frank.”

This was supposed to be the start of something special for the Colts this season. They returned many of the key pieces of a defensive unit that finished in the top 10 last season. They replaced retired left tackle Anthony Castonzo by bringing in Eric Fisher to join what has been one of the top offensive lines in recent years. And they traded for quarterback Carson Wentz to provide stability at the position and handle a tough schedule to start the season.

The Colts’ first three opponents — the Seattle Seahawks, Los Angeles Rams and Tennessee Titans — are playoff contenders, and the Rams are a team that has a chance to reach the Super Bowl. Indianapolis lost to all three, and it took a matchup with the struggling Miami Dolphins last week for the Colts to get that first victory.

But the lack of success goes deeper than playing tough opponents.

Is Wentz long-term answer at QB?

The Colts have been searching for a quarterback since 2012 overall No. 1 pick Andrew Luck shockingly retired two weeks before the start of the 2019 season.

Jacoby Brissett wasn’t the answer. Philip Rivers was a one-year stopgap — who helped lead them to the playoffs — last season at the end of his 17-year playing career while the Colts looked for their long-term answer at the position.

There was no way they could get by with having mediocre quarterback play, no matter how many times Ballard has said it’s not about one player on the roster. That’s why the Colts made a trade with the Philadelphia Eagles for Wentz, a 28-year-old in the prime of his career who needed to fine-tune his game to be their present and future franchise quarterback.

“Let’s be honest about the situation: How well is Carson Wentz going to do? I think that is really going to dictate just how far we go,” Irsay said in an interview with Indianapolis radio station 107.5 FM in the spring.

Despite his injury and confidence concerns, Wentz was handpicked by Reich to be the team’s starting quarterback because the coach believed he could get him back on track after the two spent the 2016 and 2017 seasons together when Reich was Philadelphia’s offensive coordinator. 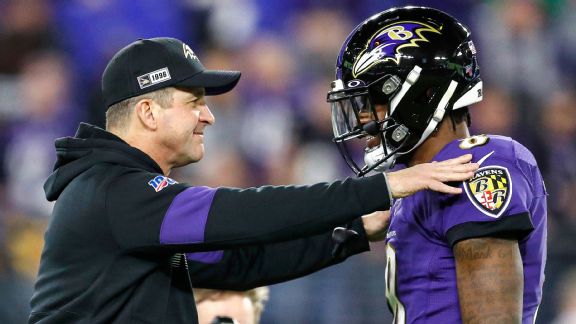 • Inside the record Ravens could break on MNF
• Colts GM patient, but fans want wins
• Two INTs caps Slay’s memorable week
• Panthers’ Darnold must improve under pressure
• Why so many huge days for Packers’ Adams?

Wentz’s start with the Colts has been anything but smooth. He missed three weeks of training camp after having left foot surgery. Then he severely sprained his right ankle when he tried to extend a play in Week 2 against the Rams. Wentz has been sacked 10 times and hit 48 times this season. The 48 quarterback hits is the fourth most among quarterbacks.

“On the play he got the ankle sprain, it was completely unnecessary,” former Colts quarterback and ESPN analyst Matt Hasselbeck said. “Know when to throw it away. This was avoidable.

“When … you’re continuing to take more hits and more hits, maybe it would be wise to play a little bit more like Philip Rivers played. Get the ball out of your hands — protects the team from sacks, helps your completion percentage, it helps everybody.”

Wentz is holding the ball longer this season (2.88 seconds) than he did in his final three seasons with the Eagles (2.76 seconds). The quarterback acknowledged recently it’ll be a challenge for him to change the way he plays after so many years of that style.

“It’s always a fine line, and I’ll probably be answering that question probably my whole career,” Wentz said Sept. 22. “Just trying to find that delicate balance of being aggressive, extending plays and knowing when to just say die and let the play die.”

Comments like that should be worrisome for the Colts.

“That makes you nervous,” ESPN analyst Ryan Clark said. “Makes you think to yourself, ‘Will this guy ever get it, and how long can we wait?’ You gave up draft picks for Wentz because you believe he’s the quarterback that can elevate the team to the next level. Then you hear him say it’s going to be hard to fix the things needed for this team to be good, for him to be productive. That makes you nervous because you don’t have five weeks, much less three years, to wait for it.”

If Wentz doesn’t work out, the blame is squarely on the shoulders of Irsay, Ballard and, especially, Reich.

‘Injuries have decimated this team’

The Colts have had bad luck with injuries, which makes it hard to win.

“Chris has done an exceptional job,” former Colts center and ESPN analyst Jeff Saturday said. “A good job of building the football team. Injuries have decimated this team this season. But ultimately it’s all about wins, and right now, they’re not getting enough wins.”

The blame can be spread around to other areas with the Colts. One of the key areas that was supposed to help Wentz this season was the offensive line, which has been a strong suit since the middle of 2018.

That hasn’t been the case thus far, largely due to injuries.

It started in training camp when All-Pro guard Quenton Nelson missed three weeks with the same foot surgery Wentz had. Now he’ll miss at least two more games after being placed on injured reserve with an ankle injury. Center Ryan Kelly missed two weeks in camp with an elbow injury. Fisher missed all of training camp recovering from a torn Achilles and didn’t play until Week 2. Right tackle Braden Smith has been out since Week 1 with a foot injury.

Also, the offensive line reserves have come up short. Veteran Sam Tevi, who is now out for the season with an Achilles injury, played poorly when trying to fill in for Fisher at left tackle. Will Holden wasn’t much better. And Julie’n Davenport has been shaky playing both tackle positions.

Receiver T.Y. Hilton has been on injured reserve with a disk injury. Hilton, despite being 31, is the team’s best downfield threat in the passing game. The Colts have two completions of more than 40 yards on the season. And, oh yeah, the Colts are 2-13 when Hilton has missed games.

Pair all of those injuries with Wentz’s health issues and securing wins gets difficult.

“What this team is now, they’re incomplete,” Clark said. “The offensive line, which was a huge strength, isn’t dominating in ways that you would expect they would with all the injuries. You combine that with Carson Wentz not making the adjustment of getting the ball out of his hand. He really hasn’t done the things he needs to do to protect himself, as well as still having some of those bad habits.”

When will Ballard’s moves lead to wins?

Ballard has made some moves to put the Colts in position to have success. Selecting Nelson, Smith, Leonard and running back Nyheim Hines in the 2018 draft. Giving up a first-round pick to trade for DeForest Buckner, one of the NFL’s best interior defensive linemen.

Through conversations with former players, coaches and key figures, Peyton Manning gets to the heart of football history and its cultural impact. Watch on ESPN+

It’s impossible for any team to go 100% when it comes to draft picks, so there have been some misses by Ballard and his staff, like safety Malik Hooker and cornerback Quincy Wilson, who were selected in the first and second rounds, respectively, of the 2017 draft.

One of the most puzzling moves by Ballard occurred this past offseason.

The Colts didn’t add an experienced backup quarterback despite knowing Wentz’s injury history. They thought second-year quarterback Jacob Eason could be the backup, but he has fallen so far down the depth chart that he was a healthy inactive against the Dolphins in Week 4.

This is the first time that the Colts started 0-3 since Reich became coach in 2018. The clock isn’t necessarily ticking on Ballard and Reich after Irsay gave the two contract extensions through the 2026 season. And the positives have outweighed the negatives in the roster Ballard has constructed the past four years, but at some point, the Colts will have to take the next step of being a contender again.

“People felt like the first five games would be a struggle either way for them,” Clark said. “I’m not surprised by their record. But there’s no consolation, because an ‘L’ is an ‘L.’ The more you lose, the further you get away from an opportunity to win the division, which gets you in the playoffs. That’s the first goal of every team, every year. There’s a lot of football left to be played in the season, but there’s work for the Colts.”

The Seahawks pranked their players with a ridiculously unfair fake schedule

The hottest tickets from the NFL’s 2022 schedule release

Jeudy’s girlfriend asks for case to be dismissed