The team was interviewing offensive coordinator candidates in mid-January, a search in which coach Pete Carroll involved Wilson heavily at his request.

But Wilson wanted to see how a guy who had never coordinated or called plays at the NFL level would think on his feet. He had Waldron put on his imaginary headset and pick up his imaginary play sheet.

“I had him call several series for me,” Wilson said. “‘We’re down by seven, here we go, first quarter’ … I wanted to hear him call it.”

Waldron knew his audience: A head coach who demands offensive balance and prioritizes protecting the ball, a quarterback who has an affinity for quick tempo and the control it gives him. When Waldron got the chance to call a drive, he had Seattle’s offense operating in hurry-up mode.

“The whole time,” Carroll said. “Yeah, he knew who he was selling. He did a good job.”

Both coach and quarterback were sold. Carroll picked Waldron in what might end up being the most important hire of his tenure in Seattle. It will go a long way in determining whether the Seahawks can get back to the Super Bowl after five early playoff exits since they nearly repeated as world champions seven seasons ago.

And given how much Wilson’s long-term confidence in the organization depends on what happens in 2021 following a tumultuous offseason in which both sides flirted with a trade, Waldron’s hire will have a significant impact on Wilson’s future in Seattle.

There’s a lot riding on the first-time offensive coordinator.

“Waldron is the perfect mesh of what Pete Carroll ultimately wants in an offense,” said Jake Heaps, a former Seahawks quarterback and Wilson’s personal coach, “which is an offense that is centered in the run game — meaning it starts there and everything else is based off of that — and with what Russell Wilson’s desire has always been, which is to put more onus on him to make calls at the line of scrimmage, to add tempo to the offense and not waiting until 2-minute situations to go up-tempo or to put a defense on its heels by getting up to the line of scrimmage faster.

“Also having a new fresh perspective in terms of offensive philosophy. That is what Shane Waldron brings to the table.”

Carroll has long admired Mike Shanahan’s version of the West Coast offense and, dating back to his USC days, has sought coordinators with a strong connection to it. Waldron worked under McVay, who worked under 49ers coach Kyle Shanahan when he was running Washington’s offense. 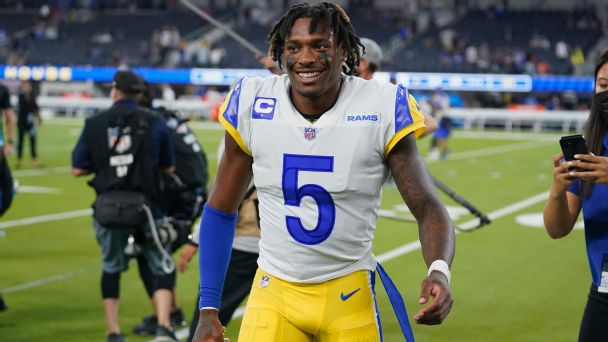 While Waldron shares the Shanahan lineage of many of his predecessors, his hiring was much different than Brian Schottenheimer’s.

Carroll brought in Schottenheimer in 2018 to revive Seattle’s running game and to work hands-on with Wilson as his de facto position coach. But Carroll didn’t want a wholesale scheme change, so he made Schottenheimer keep the majority of their playbook.

While there is some carryover, Seattle is running a mostly-new system under Waldron, one that borrows heavily from McVay’s. There are more opportunities for receivers to be involved in the running game on fly sweeps. There’s an emphasis on short and intermediate throws, something the Seahawks believe they were missing when their offense hit a wall in the second half of last season.

And there’s more of the quick tempo that Wilson loves — even in situations where the clock doesn’t necessitate it. Per ESPN Stats & Information, the Seahawks have run the sixth-most plays this season in which the ball was snapped within 30 seconds (real time) of the end of the previous play. They were 20th in such plays last season.

Ask him about the design of a given play and Wilson will play it close to the vest, saying he doesn’t want to reveal too much. But ask him about the merits of a hurry-up style and you’ll get a different answer.

He’ll explain the strain it puts on defenses, keeping them in the same personnel and tiring them out. He’ll talk about how it replicates the urgency that has served Seattle’s offense so well in late-game situations, as Wilson has the most fourth-quarter/overtime comebacks of any quarterback since entering the league in 2012.

And it gives Wilson freedom to call plays at the line of scrimmage. It could be with a one-word call when they’re trying to snap it quickly, or an audible after Wilson identifies the defense.

“I had always been curious of what the Rams were doing, with up-tempo especially,” Wilson said. “… When [GM] John Schneider, Pete and I talked about who the guys could possibly be, that was one of the things that stood out. For me, that was something that definitely mattered in the sense of how could we be slightly different? What can we add? How can we continue to challenge?”

Heaps called Sunday’s win against the 49ers a perfect illustration.

The Seahawks slogged their way through five straight three-and-outs, finally got a first down and immediately pushed the pace on their first touchdown drive. They went back to the hurry-up in the second half, scored 21 more points and left Levi’s Stadium with a win that might have turned the season around.

Wilson was sacked three times during the first five drives against the 49ers, but not sacked after that.

“It wears the defensive line down,” Heaps said. “That’s really the guys that you’re trying to keep on the field so you can wear them down in the running game and also their pass-rush becomes stagnant because those guys are tired and they’re not able to go full speed. So those are the different ways you can counteract some of those issues they’ve had in the past, outside of just having better personnel. You can do that with your scheme and using your tempo to your advantage.”

Can Wilson be won over?

Before this season, Waldron had called plays a handful of times in Rams scrimmages and preseason games. There was also the year he spent as a Massachusetts high school offensive coordinator in 2011, in between stints as a position coach with UMass and the UFL’s Hartford Colonials.

By all accounts, the low-key Waldron has shown he can handle the chaos of an NFL game.

“One thing about Shane that I like is that I’ve never seen him mad,” receiver DK Metcalf said. “He’s always level-headed, cool-headed and very encouraging. That’s great on game day. And the way he communicates on the sideline is always positive, just like Russ. They’re the perfect match for each other.”

Those comments came after a stress-free win over the Indianapolis Colts in the season opener. What about a loss?

“Shane is super consistent every day,” Wilson said after Seattle fell in overtime to the Tennessee Titans in Week 2. “He’s even-keeled. He’s focused on what we need to do. Me and him marry those thoughts up together in such a great way. We’re on to the next one.”

The Seahawks will need more than their coordinator and quarterback being in alignment. That wasn’t the issue last year. Wilson appreciated how Schottenheimer pushed to open up their offense and how he pushed back when Carroll reined it in late in the year. Those philosophical differences and Seattle’s second-half offensive slide led to Schottenheimer’s departure.

Two weeks after Seattle hired Waldron, Wilson sounded off on his unrelated frustrations with the organization.They were in a better place by the start of free agency, but whether that harmony lasts rests largely on what happens the rest of the season.

Will he take fewer hits with more quick passing and one upgrade (right guard Gabe Jackson) from last season’s line? Will Waldron adjust better than Schottenheimer if opponents start defending differently? Will Carroll dial back the offense again if it runs into trouble? Will they finally get over their divisional-round hump?

Depending on how it goes, the Seahawks and their franchise quarterback could be back at the same crossroads this offseason.

They believe Waldron is the right coordinator to get the most out of Wilson and his talented collection of skill players. But given the uncertainty beyond 2021, it has to happen in a hurry.