With the Premier League back in action for the first time since the summer transfer window closed, this feels like a good time to take stock.

The clubs who have finished in the top four in each of the past two seasons — Chelsea, Liverpool, defending champions Manchester City and Manchester United — have assembled incredibly strong squads for the rigours of the 2021-22 campaign. This quartet are incredibly well-stocked for the campaign ahead, with a depth of talent in almost every position.

Man United played a blinder late in the window as Cristiano Ronaldo returned to Old Trafford to further increase Ole Gunnar Solskjaer’s attacking options — also denying local rivals City the chance of signing the five-time Ballon d’Or winner in the process. Chelsea pulled off their own deadline-day coup by landing Saul Niguez from Atletico Madrid to bolster their midfield, while Liverpool added to their defensive options after last season’s injury crisis.

Man City signed Jack Grealish in a British-record transfer, though the loss of Sergio Aguero has left Pep Guardiola’s front line looking decidedly bare as his side embarks upon an arduous title defence.

Here we look look those four squads, judging each on a position-by-position basis before declaring overall “winners.” While every squad has one or two players who can fill several slots in the team, here they are listed by their principal position, although versatility is taken into account.

Which Premier League side has the best squad depth? 🤔 pic.twitter.com/Uth8Ksbpey

Perhaps the most overloaded position on the entire pitch with a plethora of top-tier goalkeepers to call upon, both as first choice and in reserve. For our money at least, Alisson is the most complete goalkeeper on offer (he even chips in with the odd winning goal), but his No. 2, Adrian, is the only one who is not a full international. United’s other returnee, Tom Heaton, bolsters United’s options sufficiently to give them the edge here. 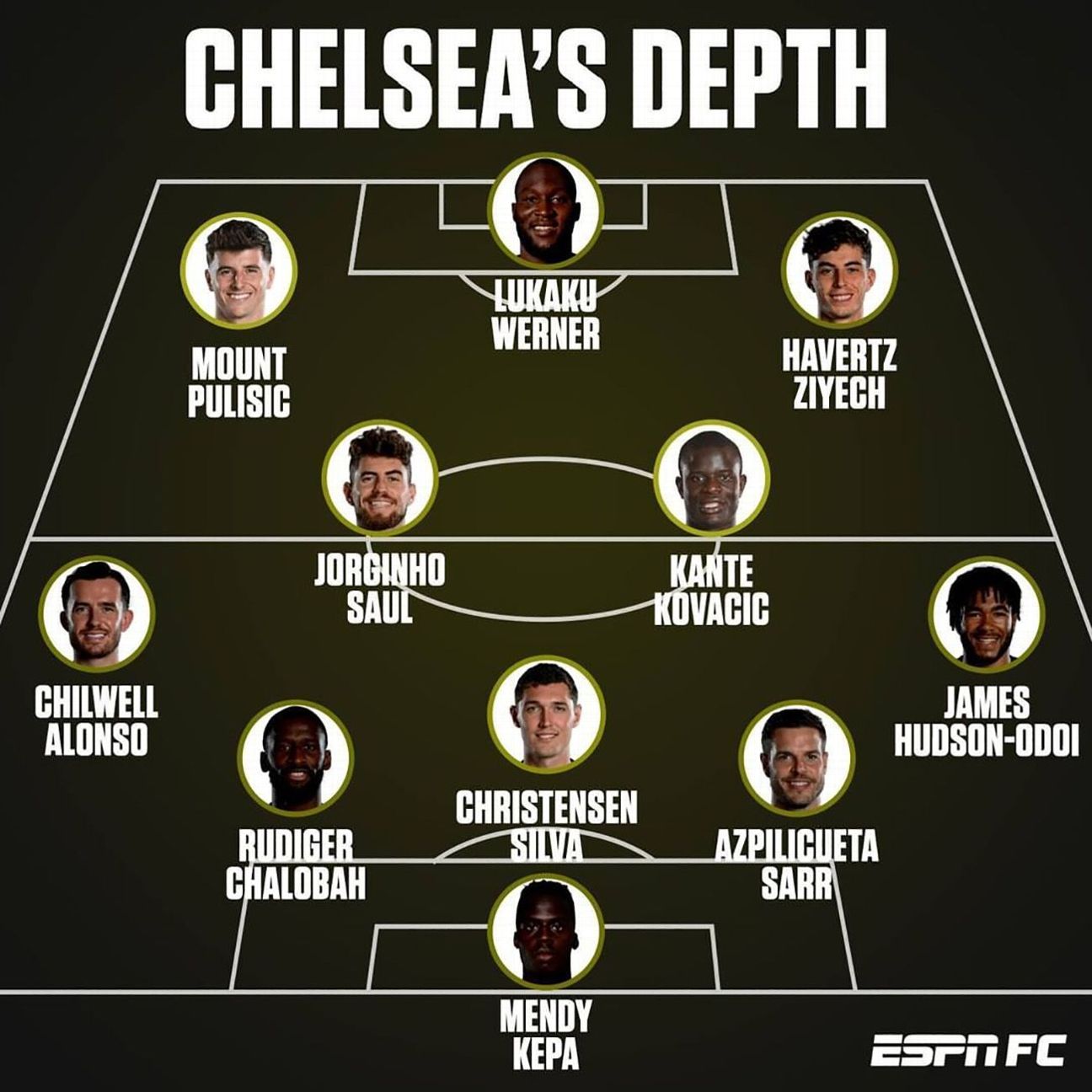 While both have endured injury issues in the past, Shaw and Telles are an assured pair for United — particularly Shaw, who has returned from a spate of setbacks to recapture the sparkling form that first landed him his big move to Old Trafford in 2014.

The ever-popular Robertson continues to be a driving force for Liverpool, while over at City, Zinchenko remains underrated as a utility man, while Cancelo is similarly versatile and able to fill in on either side of the defence. Chelsea are also able to call upon two quality left-backs, both of whom are capable of supporting attacks from the flank, while Alonso in particular doubles up as a genuinely consistent goal threat.

There must be some weight behind the adage that defences win you titles, because all four clubs are kitted out with excellent options at centre-back.

Straight off the bat, Chelsea possess an embarrassment of riches in terms of sheer numbers, which suits Tuchel’s preference for fielding three centre-backs. Club captain Cesar Azpilicueta, formerly a right-back, now takes his place on the right side of the back three.

Liverpool were afforded no such luxury last season as Jurgen Klopp’s defensive ranks were ravaged by injury, but the summer arrival of the much-coveted Konate from RB Leipzig, coupled with the long-awaited return to fitness of Van Dijk, has them well-stocked for the season.

Maguire has become a stalwart for United, who will no doubt only benefit from adding an elegant and vastly experienced winner like Varane. Meanhwile, Man City’s defence was essentially non-porous throughout 2020-21 as Dias — who monopolised last season’s domestic player of the year awards — and Stones formed a formidable pairing, while Laporte and Ake are still on hand to provide high-calibre cover when required.

A position positively overflowing with international quality, to the point where it was England manager Gareth Southgate’s main selection dilemma at Euro 2020.

Again, all four teams have strong candidates in place as first choice, though Man City don’t really have a specified back-up as cover for Walker, and Chelsea’s reserve Hudson-Odoi is a winger by trade, though he has been deployed as a wing-back since Thomas Tuchel took over as manager in January.

Alexander-Arnold was the right-back in 2020’s FIFPro World XI and is a more rounded player than Wan-Bissaka, in terms of his combined offensive and defensive output. It’s tight between Liverpool and Manchester United here, but United sneak it by virtue of Dalot having more top-level experience than Williams as a second-choice. 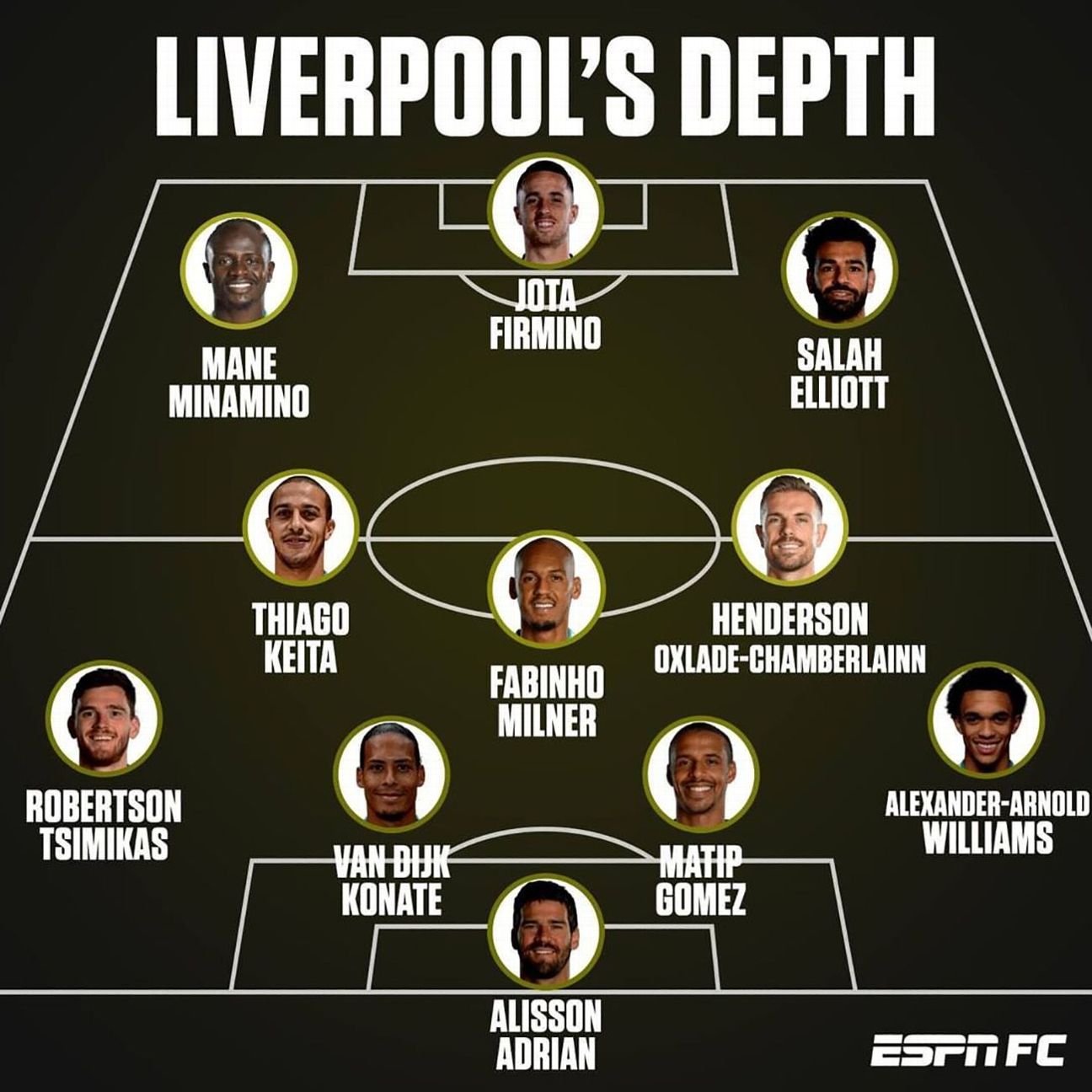 Despite their best efforts, United still don’t really boast a proper, dedicated defensive midfielder, with most of Solskjaer’s options in the middle far more comfortable operating in advanced, ball-playing roles. United unquestionably have the numbers and quality in depth. However, once you look beyond Pogba, the lustre begins to diminish rather quickly.

City will rely heavily on the pairing of Rodri and an evergreen Fernandinho to control central areas, but with the latter turning 37 this season, it remains to be seen just how much the Brazilian field marshal has got left in the tank.

Liverpool have a balanced mix of skills and specialisms at their disposal, from Henderson’s on-pitch management to Thiago’s range of passing, while both Milner and Fabinho have proven themselves to be reliable for the Reds while slotting in here, there and everywhere like a pair of human Swiss army knives.

Chelsea have a Euro 2020 winner in Jorginho pulling the strings (and taking the penalties), alongside a world-class player in Kante, who has proven time and again how important he is to the way the team defends, recovers possession and attacks.

Fernandes was a constant source of goals and assists in a United shirt last season, though we’ve seen at international level just how he struggles to match that output once forced to play second fiddle to Ronaldo. Chelsea landing Saul on transfer deadline day looks to be a considerable coup, even considering his poor debut against Aston Villa, and he will be joining a similarly pugnacious box-to-boxer in Kovacic as part of Tuchel’s more advanced central midfield options.

Both Oxlade-Chamberlain and Keita are hard-working ball carriers, but Jurgen Klopp’s tactical set-up means that his front three and full-backs take care of most of the chance-creation duties. Meanwhile, Man City have an enviable pool to pick from — especially if De Bruyne, the best creative midfielder in the league by a stretch, can stay fit for the majority of the 2021-22 campaign. 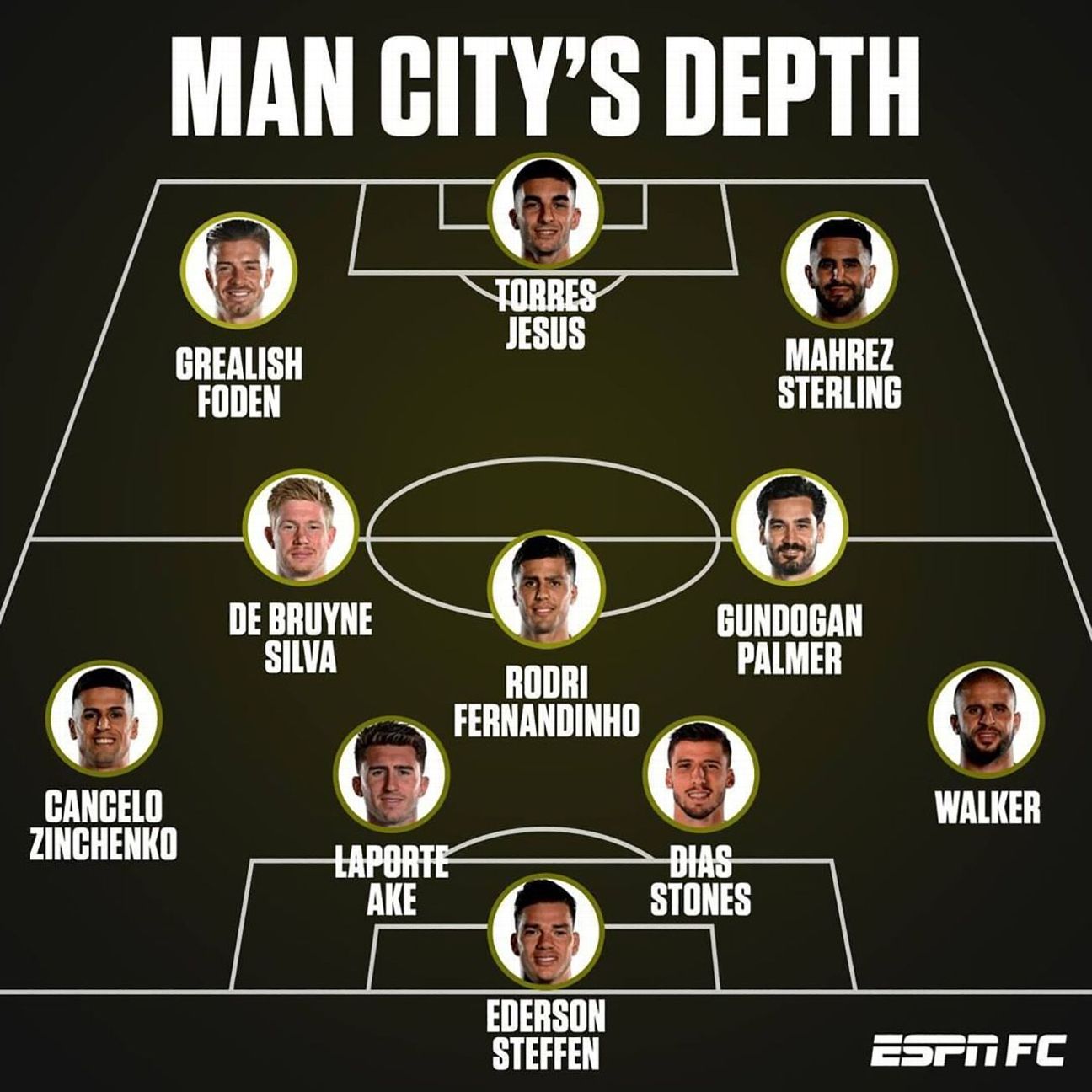 The quality on display in the wide attacking roles from all four clubs is formidable, with Chelsea boasting two young attackers — Mount and Pulisic — who have bags of experience for their age, and are capable of performing multiple roles within the side.

For United, Rashford and Martial are both struggling to recreate their best form due to a grating mix of injury and inconsistency, while Mane is hardly operating at full steam for Liverpool at the moment either. This one, though, goes to Man City, who have fleet-footed £100m man Grealish and prodigious young string-puller Foden to call upon once the latter returns to full fitness.

Salah has claimed the Golden Boot twice in his four full seasons at Anfield — scoring 19 or more league goals every year along the way, while Chelsea’s Havertz has a top career ahead of him with a Champions League-winning goal already under his belt

Sancho is yet to get up and running at Old Trafford, but he remains one of England’s most exciting young wingers, with 19-year-old understudy Diallo equally keen to prove his credentials when the chance arises. However, City boss Pep Guardiola surely has the best one-two in Sterling and Mahrez, who have six Premier League titles between them and are slap-bang in the middle of their peak years. 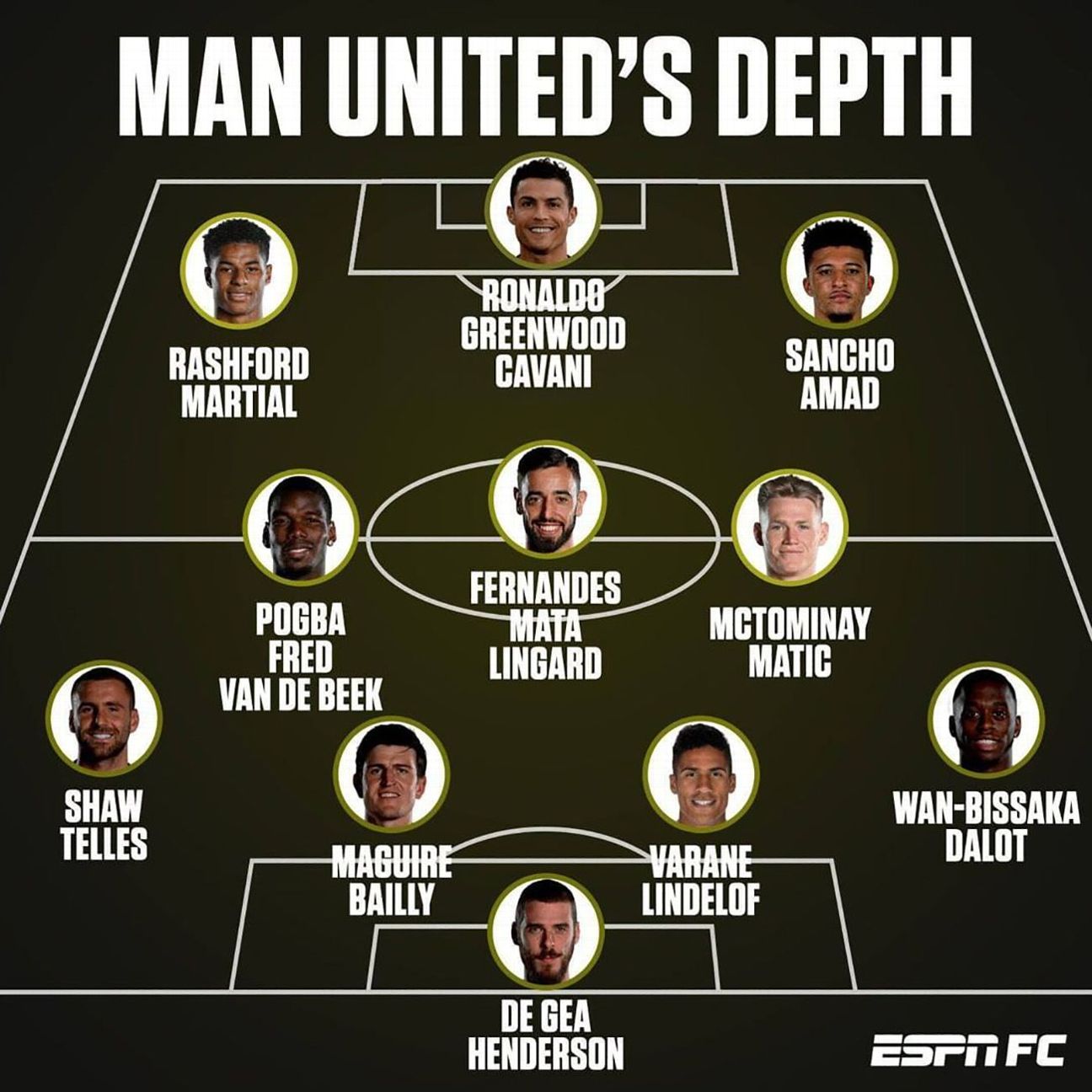 Liverpool and Man City curiously don’t have a traditional centre-forward to call upon between them this season with all four options — Jota, Firmino, Torres and Jesus — being multi-purpose attackers rather than instinctive, line-leading No. 9s.

Chelsea have have exactly that after re-signing Lukaku, who is off and firing already and could the missing piece of last season’s attacking puzzle for Tuchel — a puzzle which centred around Werner, who is yet to win over his doubters since moving to Stamford Bridge.

Manchester United have two vastly experienced international forwards in their midst, one of whom just so happens to be a five-time Ballon d’Or winner with over 700 career goals to his name. He may be 36 and entering his footballing dotage, but if Ronaldo catches fire at Old Trafford second time around, Cavani or Greenwood might not get much of a look-in.

Few would disagree that Tuchel’s squad is fully kitted out and capable of challenging for the Premier League title this time round, though City look more than ready to defend the crown they won by 12 points last season. City’s positional victories come at the heart of the defence and right across the attacking line behind the striker, serving to highlight their abundant forward options, such is Guardiola’s preferred style of breaking opponents down.

Despite all of their main rivals making significant improvements to their squads this summer, it’s City who are the club with the best squad depth in the Premier League this season.

Arteta: Arsenal must ‘swallow the poison’ after loss

Source: Ledezma has ‘no commitment’ to Mexico

Where would Man United be without Ronaldo? How he saved a grim season from total meltdown